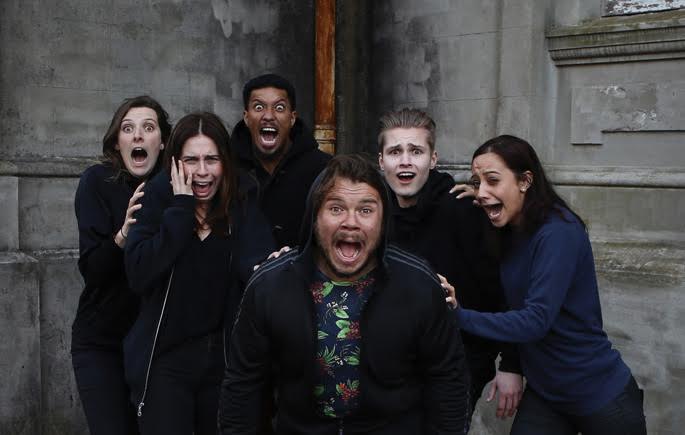 Ghosts, darkness, bed bugs, unfulfilled dreams – what are you afraid of? Inspired by the works of Edgar Allan Poe and Roald Dahl’s Tales of the Unexpected, A Ghost Tale is an independent production which encompasses a collection of horror stories that tackles this very question.

Set in the round, the lines between audience and performer are blurred as the cast of six weave in and out from all corners of the performance space. This decision is a clever one and lends itself brilliantly to the genre as this creates a palpable sense of unease which keeps the audience constantly on edge. It also gives each person a unique perspective of the stories that unfold in that your experience of this piece is highly dependent on where you sit.

Over the course of the hour, the ensemble who play a group of friends take it in turns to tell a scary story in an attempt to ‘out-spook’ one another. Each account transitions smoothly in to the next with the performers taking on a variety of roles. These characters are put in different creepy scenarios – some with more scare factor than others – all of which are thematically linked to exploring horror beyond the usual tropes.

I appreciate the approach Benjamin Teh has taken to bringing this theme to the stage. His script is discerningly written and has to be lauded for not relying on cheap scares but instead choosing to delve deeper into the human psyche, examining what is actually truly scary beyond the things that go bump in the night.

It is very easy for plays in this genre to veer in to over-the-top, clichéd territory and thankfully it manages to just toe the line. Under Jesse Hilford’s thoughtful direction, the performances by the cast strike just the right balance between theatrical and believable.

The only downside about having the narrative broken down into short stories is the audience are not afforded the chance to fully get to know or invest in any of the characters. This aside, the narrative as it stands still works, and considering this is an independent effort, the overall production appears polished and well thought out.

Teamed together with Sean Kelly’s chilling soundscape and complemented by Nova Jackson’s lighting design, A Ghost Tale is a highly atmospheric, subtly thought-provoking and eerily engaging experience. It might not spook you out of your seat but the underlying message may just scare you even more.

A Ghost Tale is on at The Basement until 12th of November. For more details and to book tickets, click here.

I am a freelance arts reviewer from Auckland, New Zealand. I love experiencing live entertainment and performing arts in all its forms and enjoy writing about the experience after. I started writing on my flagship website Whimsical Banana in 2011 while also reviewing for other publications like Keeping Up With NZ as well as penning TV reviews for FOUR/TV3. Between 2013 and 2015 I was based in the UK/Ireland where I joined Broadway Baby as a comedy and theatre reviewer. I feel extremely privileged to have gotten the opportunity to cover the Edinburgh Fringe in 2013 and 2014, where I reviewed a total of sixty-one shows. Now back on home turf, I have created this new website to coincide with my return to reviewing in NZ. I also hope it reflects how much I’ve grown and developed as a writer. When I’m not writing, I work full-time at Auckland Live as well as run BaristaCats Café, Auckland’s Central Cat Café. Throughout the month of August, I assist the Broadway Baby team from afar as a comedy and theatre sub-editor. When I am not juggling all these things, I enjoy TV, cooking/baking, a glass of wine with friends, and being a crazy cat lady.

Blast from the Past! (coming soon)

I am always keen to check out new shows while also seeking more writing experience so if you like what you have read and would love to have me contribute reviews or review your show - or if you just want to say hi - please get in touch! Tweet me, Facebook me or you can send me an email at faithashw [dot] AFTA [at] gmail [dot] com.